Era Uma Vez​ in the news! 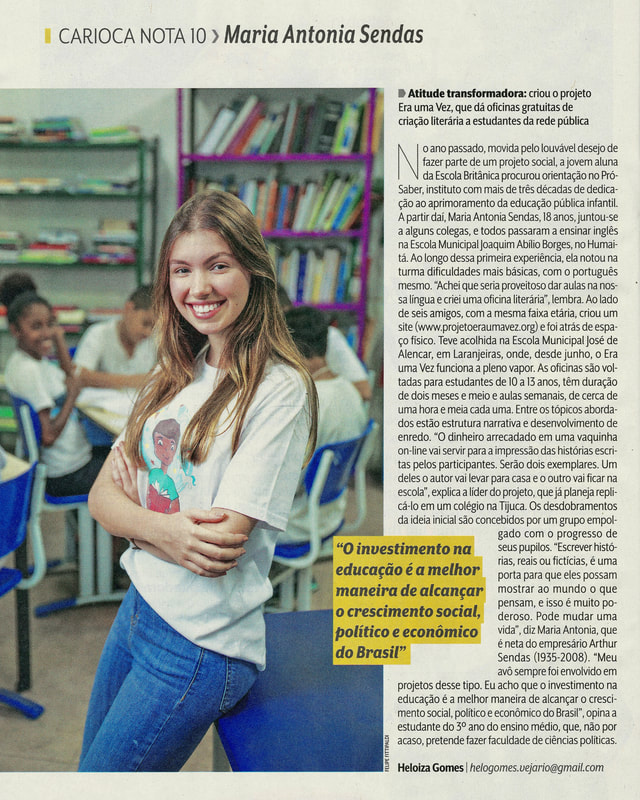 Text translation:
Great Carioca: Maria Antonia Sendas
Transformative attitude: She created Projeto Era Uma Vez (Once Upon a Time), which gives free literary workshops to students from public schools.
Last year, moved by a laudable desire to be part of a social project, the young British School student asked for guidance and Pró-Saber, an institute more than three decades old dedicated to the development of early childhood education.
From then on, Maria Antonia Sendas, 18 years old, teamed up with some friends and all of them started teaching English at Escola Municipal Joaquim Abílio Borges (Municipal School Joaquim Abílio Borges) in Humaitá. During this first experience, she noticed some basic difficulties the students had with the Portuguese language. "I thought it would be useful to teach lessons in our own language, so I created a literary workshop", she remembers. Along with six friends of the same age range, she created a website (www.projetoeraumavez.org) and began looking for physical space. She received support at Escola Municipal José de Alencar (Municipal School José de Alencar) in Laranjeiras, where, since June, the project "Era Uma Vez" (Once Upon a Time) has been in full swing. The workshops are directed to students aged 10 to 13. They have a duration of two and a half months, and the weekly lessons have the duration of one hour and a half. Among the topics covered, there is narrative structure and storyline development. "The money raised through an online voluntary fund is going to help print the stories written by the students. There will be two copies: one of them the author will take home, and the other will stay at the school", explains the project leader, who is already planning to replicate the project at another local school in Tijuca. The developments of the initial idea are conceived by a group excited with the progress of their pupils. "To write stories, real or fictitious, is a way for them to show the world what they think, and that is very powerful. It can change a life.", says Maria Antonia, granddaughter of Arthur Sendas (1935-2008). "My grandfather was always involved in projects of this kind. I think that the investment in education is the best way to reach social, political and economic growth in Brazil", believes the high school senior, who, not by change, wants to study Political Science at college.
By Heloiza Gomes - helogomes.vejario@gmail.com
Veja Rio, 8 August, 2018 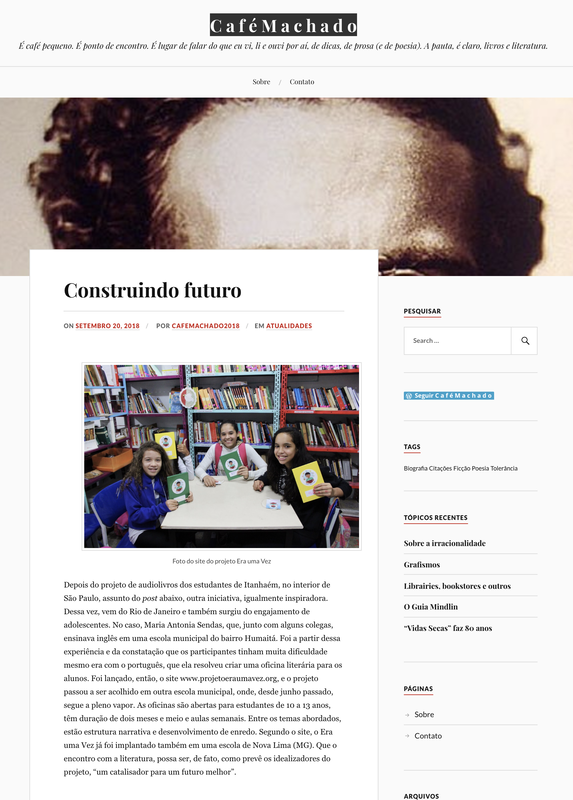 Text translation:
"Building the future"
After the audiobooks project from students in Itanhaém, in the interior of São Paulo, featured in the post below, we find here another initiative which is equally inspiring. This time, it comes from Rio de Janeiro, and also arose from the engagement of teenagers. Maria Antonia Sendas, who, together with some colleagues, used to English at a municipal school in the Humaitá neighborhood. It after this experience and from the observation that the participants had a great difficulty even with Portuguese, that she decided to create a literary workshop for the students. The website www.projetoeraumavez.org was launched, and the project started to be hosted in another municipal school, where, since last June, it has been in full swing. The workshops are open to students aged 10 to 13, lasting two and a half months and weekly classes. Among the topics covered are narrative structure and plot development. According to the website, Era Uma Vez was also brought to a school in Nova Lima (MG). We agree that the encounter with literature, can be, indeed, as predicted by the project's creators, "a catalyst for a better future".